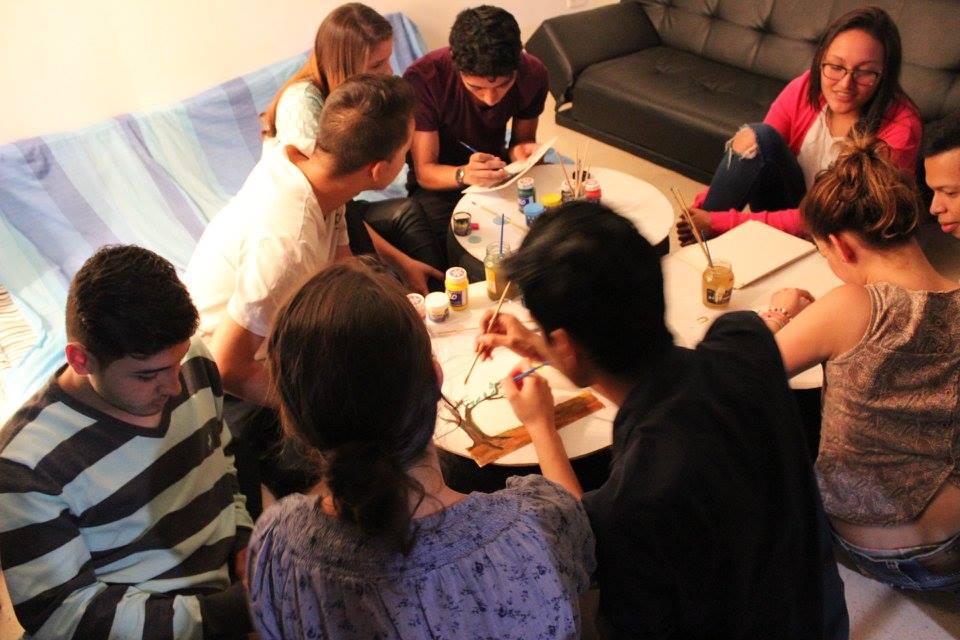 I have been thinking about sharing with you this super exciting new research tool we have been playing with at Recrear. It’s called ‘Actionbound’ and it’s a mobile app.
Let me tell you all about it :D.

While Kirsten and I were in Cuba, we realized that we had planned a series of research activities that were too static for our taste. How could we integrate more movement?

And then BAM! It came. We’ll organize a treasure hunt.

I love treasure hunts. I had a couple of epic ones when I was a kid. They stayed with me as memories of adventurous exploring while trying not to pee on myself from excitement.

In Cuba, we organized three daylong treasure hunts. Since we were studying how young people relate to climate change adaptation, we organized the hunts in nature: one in a permaculture farm in Habana, one in a botanical garden in Villa Clara, and one on a beach in Santiago de Cuba. We set up clues that would allow participants to get to know their environment. Between each clue, the different teams were asked to complete some exercises in order to receive the next step. During the hunt they mapped out their communities, drew a daily clock to share their routines, wrote a letter to authority, and sketched out a map of the world.

We got the groups to run around, play and explore. And sweat. A lot.
On our side, we spent late nights designing clever hints. In the morning, we’d wake up early the morning of the hunt to hide the papers in the right place, hoping that we would not get confused and mess up the different routes. This was 2014.

Now in 2016 my colleague Jonas stumbled upon this app called Actionbound. The website explains that ‘Actionbound is an app for playing digitally interactive scavenger hunts to lead the learner on a path of discovery.’ So we got excited. A digitized treasure hunt for research.

We decided to test it out in a party last month. We invited all of our friends and colleagues in Medellin for an event that we called the ‘Recrear Open House’.

We prepared four stations around the apartment. As guests arrived at our door, we asked them to download the app. We had printed out and placed the first QR code on the door. We then programmed the application to give all users instructions. People were asked to get together with a team of 3 or 4. As a team, they were guided through the various stations. 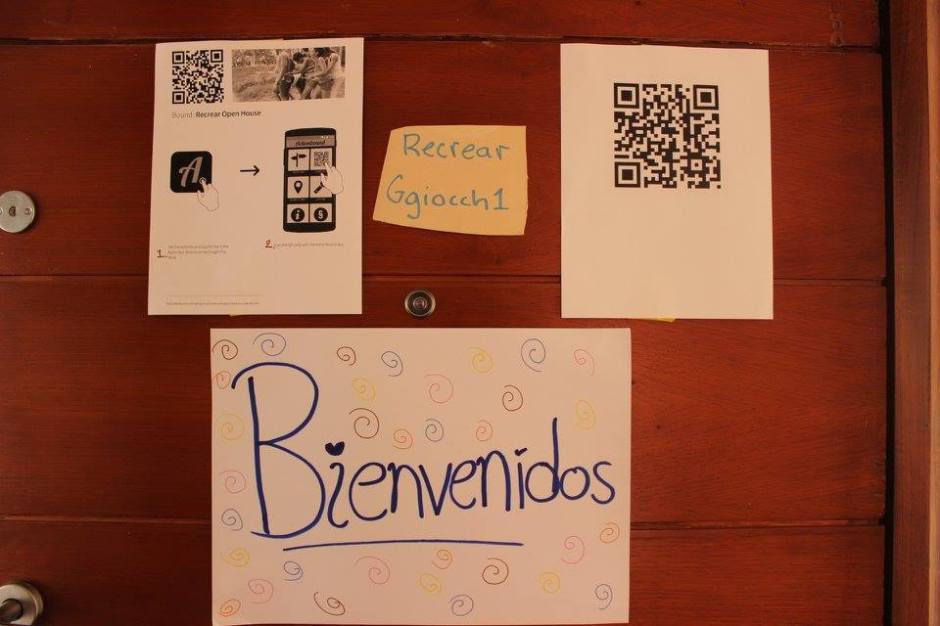 The first task asked participants to make a collective map of the social organizations around the city. By the end of the night the map was filled with loads of post-its of organizations that I am slowly learning more about. Here is a photo of the map. 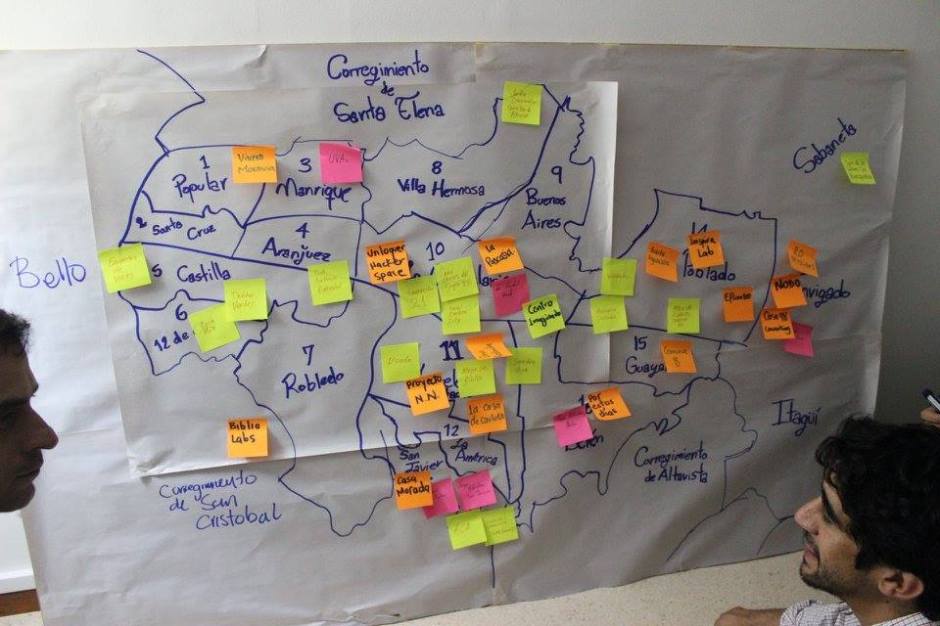 The second task asked people to paint the concept of ‘resistance’. Teams would find their QR code in a room with paint, brushes, papers and some soothing music.

The third station asked people to film themselves acting out different roles and engaging in a discussion around ‘innovation’ in the city. Finally, the last station asked the teams to share music or pop culture pieces that represented young people in the city. We had around 30 people take part. 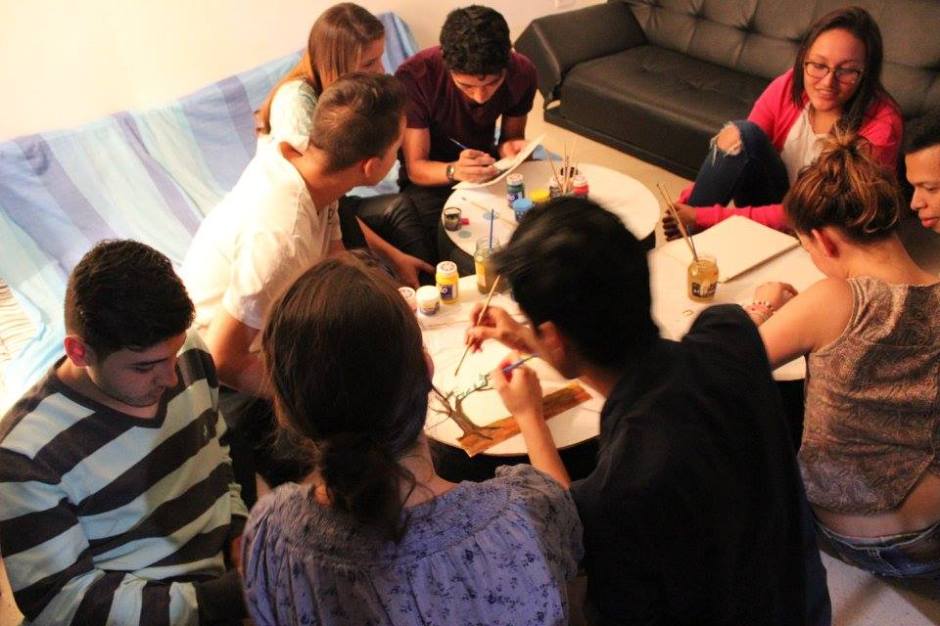 In between each station, we also added silly activities. The first task was to do a bonding exercise to get to know your team members by asking each other a few questions. At some point in the game they were also asked to do (and film) a team ritual.

Here is a team ritual!

Teams went through the game at their own pace. Some teams completed the game in 1 hour while others took two and a half. The best surprise came at the end of the night, when we all sat around the floor of the living room watching the results become available on the dashboard of Actionbound. The most annoying thing in the post treasure hunt is keeping track of what has been done and said. Systematizing all the data is a mess. With Actionbound, all the data is submitted directly to the digital platform so that by the end of the night, we had all data right there in front of us: videos, photos, links, and comments. We could not be more excited!

So we did it again. This time the game was organized by one of the teams during RecrearMagnify. They organized the hunt in a beautiful ecological park (birds, flowers, river and all). This time I got to participate and experience all the sweat and running around. I watched myself getting really competitive and rushing through all the fun activities (which included writing a poem, developing some research questions, crossing a river, and even filming a modern dance on the concept of forgiveness).

During our debrief we discussed that in the future we would like to set a minimum time participants have to spend on each activity, so that the teams would not feel compelled to hurry up. 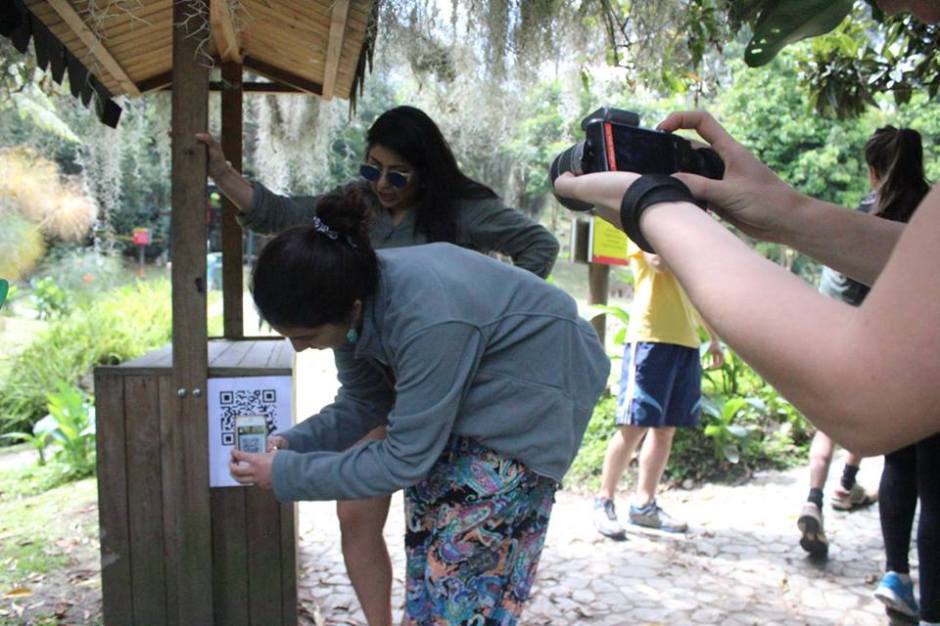 To me it is exciting to think that research can occupy public space, and become an adventure. I’d love to test out Actionbound at IDS. I thought a treasure hunt could be a great activity to organize during the orientation of students in the master programs (one task could be to find a specific book in the library, so that students get to learn about the library filing system!). Well, I hope you are enjoying Italy, and that we get to play together with Actionbound sometime soon!